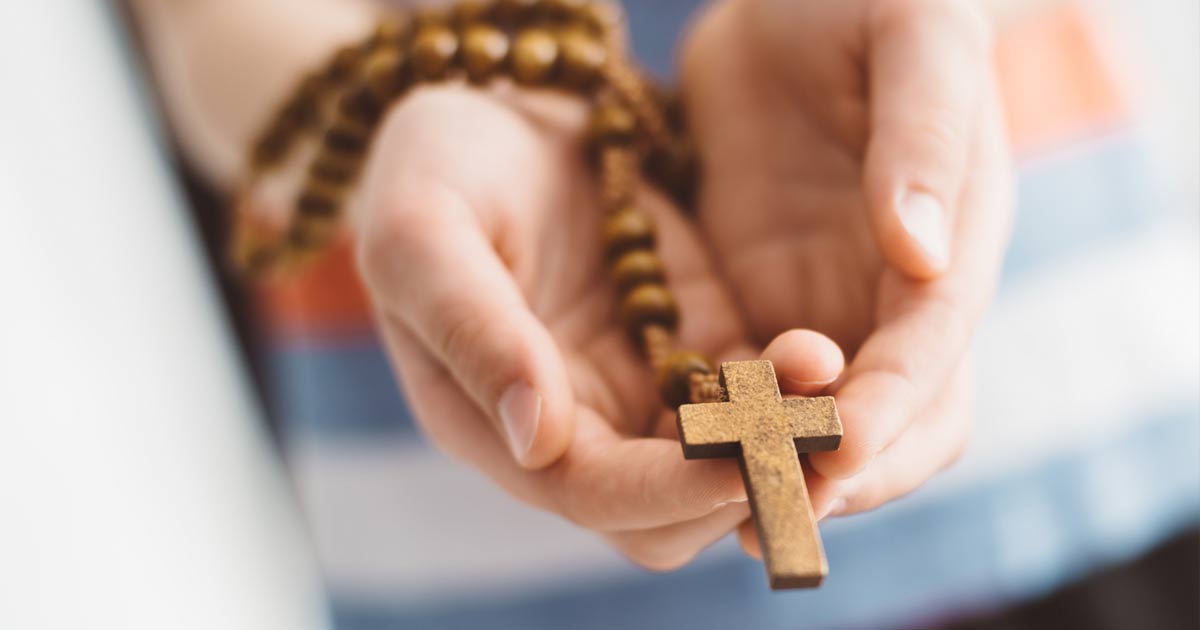 I close my eyes and count on my fingers the number of Hail Mary’s we have said, and for those few moments I am peaceful. I can feel the warm of my colleagues as I struggle to keep up with the words but at the same time I feel carried away with those same words.

Every Friday, we meet in an empty exam room of our busy, downtown clinic to pray the Rosary.  We take 10 minutes out of our week to make a place for this communal prayer. It is special and I am grateful for its continuation but I am also in awe of how the group formed. The Holy Spirit works in mysterious ways.

A simple request by one of my colleagues, started the chain of events that led to this special place in our work site. I was asked to find 10 friends to say the Rosary for a very sick family member. My faith is not a secret but what was a secret is how little I know about saying the Rosary. I had seen the pamphlets in the church vestibule and yes I had said parts of the Rosary at the funerals and I had my children say a couple of decadents of Hail Mary’s on Good Fridays but I knew very little. How could I honour my colleagues’ request? I do not even know 10 people who attend church regularly!

Over the course of the next 2 weeks, I formed a plan. I would ask the small group of colleagues who I sometimes went to church with at lunch—to come to a prayer meeting. I found a secretary new to our department who was keen to lead the prayer. I did not know at the time that she leads prayer at her home and church often!  Slowly, my colleagues agreed to come—one by one. I thought it would be a one-time event—perhaps even non-denominational.  As more people agreed to come—I grew bolder—asking more and more people. Colleagues I did not even know were Christian began to collect. I was careful not to exclude my Muslim and Jewish colleagues –inviting them to join but gently stating it was more leaning on the Christian path. I wanted them to know religious practices are not meant to divide but to bring together. One Muslim secretary thought it was a good idea to read her prayers at the same time which was her practice for Fridays but she had been forgetting lately. Some colleagues stated they were not interested but were very pleased that our group existed!

The group has been going strong for months—growing and staying stable at the same time. Sometimes there are 12 people there and other times just 3. But when 2 or more are gathered Jesus is there! We pray for our colleagues, our families and children everywhere. If a colleague is sick or in need, we pray for them—sometimes in secret but it is so nice to be able to say—we are praying for you in our prayer group. Sometimes a difficult situation arises with my patients and that very day— I send off prayers for them—anonymously of course– but I am more inclined now to make my patients a part of my prayer journey because this prayer group happens within my workplace!

It is not held together by a single person but the group as a whole. When one is away, it carries on without them. The members are diverse and include physicians, nurse, allied health, secretaries, housekeepers!

I have seen a change already within our work group. We are all a little bit calmer and we laugh just a little bit more. Our sea of calm is growing.

My own personal intentions and struggles have become better especially with my most important role as a mother of three very difficult and troubled young adults. Praying the rosary has opened up a whole new world of opportunity for peace for me. I never realized the full power of Our Lady, Mother Mary the Mother of God and I feel strong again!

NOTE FROM EDITOR: This blog post has been written by one of the Mothers Group members at www.CatholicMomsGroup.com. She decided to start a Prayer Group at her workplace, a major downton Toronto hospital. She has asked that the blog post be anonymous.