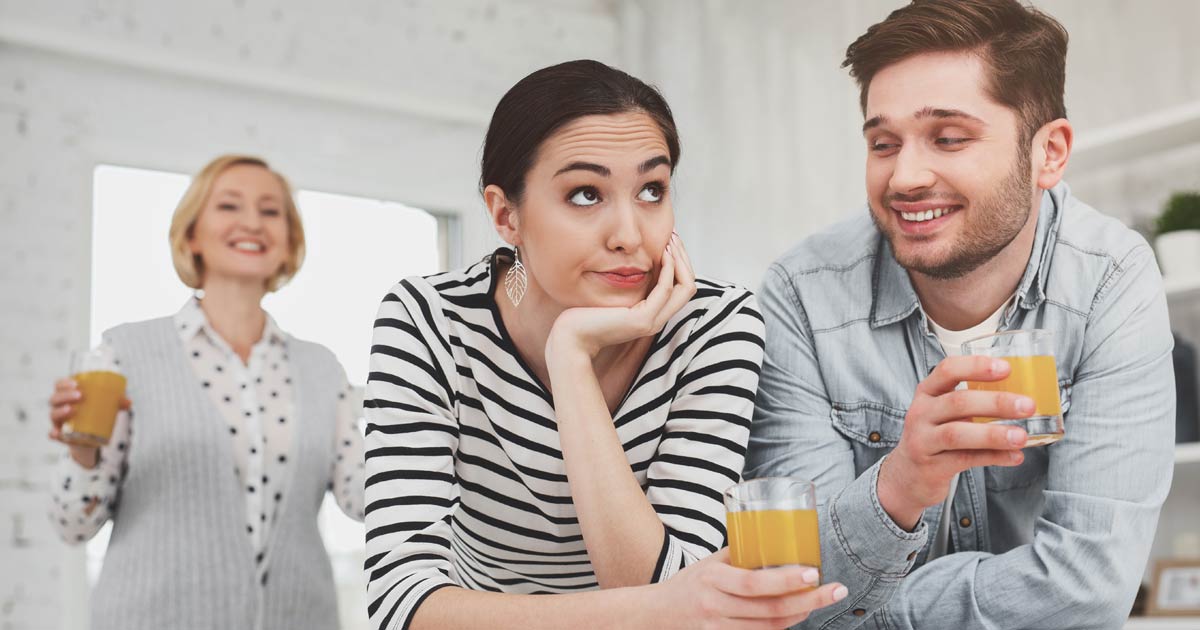 10 Tips for Dealing with Your Mother-in-Law

When you are looking for some tips, where do you go for help?

I belong to several groups online, some of which claim to be Catholic, but if you read the comments they are hardly recognizable as Catholic at all. There is one group which has thousands of members, but the founder basically bullied me out out of the group because I challenged her, proposed some alternative resources to her own.  It became a little too exhausting challenging her, so I just left the group.

Recently, in another group, a young wife and mom asked for some advice about dealing with her mother-in-law and the post exploded. I can’t remember exactly how many comments there were, but I am pretty sure it was close to two hundred or so. Apparently, a lot of women have problems with their mother-in-laws and many are quick to give advice.  Again, these were Catholic wives, in a Catholic group, but many of their responses were not Catholic at all. It would be impossible for me to cover the depth and the breadth of the discussion, but their were many things that shook me. I have written this blog post is a quick reminder that not everything you hear online is good advice, just because it’s a Catholic group doesn’t mean the advice you’ll get regarding your marriage, mother-in-law or raising your children, will be rooted in Catholic thought. So, what shook me?

There were many women, given just a little bit of information, who started to pipe in using many psychological terms, labelling the mother-in-law as being a narcissist, one even suggested she has a personality disorder. Many demonized the mother-in-law and taking the side of the mom who posted, referring to her (the poster) as if she was flawless, without any defects of her own. Then a frenzy of psychobabble, laced with with tinges of feminism began. “You’ve have to create boundaries, it’s sounds like enmeshment, this is emotional abuse, you have to tell her exactly how she’s hurt you and what she’s doing wrong, this is a toxic situation, call a family meeting including your husband, both of your in-laws and thoroughly discuss issues and your needs...”

I got my back up, just because I actually knew the young mom, her in-laws raised a remarkable upright Catholic son, it was very clear that these well meaning women, that were trying to give her advice, based on a very little bit of information were in actual fact, quite misguided.

Some “Catholic” women that were giving her advice were ruthless.  One woman said, “I blocked my husbands family on Facebook, we don’t see them anymore and we are much happier for it.” While I don’t usually get involved in 99% of the stuff I see online, just because it can be down right exhausting, I felt I had to, because I knew the woman who posted and I couldn’t believe the advice she was getting from an apparently Traditional Catholic Women’s Group. I threw down the gauntlet when I saw one woman recommend a book by a prominent New Age author.

So, what might be a Catholic way of dealing with a mother in law, or any other difficult relative?

First of all, read and ponder MT 10:34-11:1 – Christ told us that we would have conflict in our families. It’s to be expected, it’s normal. It doesn’t always mean there are psychological issues associated with it.  Christ also said, “Pick up your cross.” Jesus didn’t say: “Run away from the cross, block the cross, or give the cross a piece of your mind.”

Remember that talking about issues, doesn’t always make them better. In certain cultures, talking about things is known in communities to actually making things worse. North Americans can be relentless in  talking about things at nauseam, all the while exasperating hurts, furthering conflicts. Maybe instead of talking about it, pray about it a little more? Consider Our Blessed Mother Luke 2:19 who pondered things in her heart.  I am not saying it’s never right to talk about things, but there is a tremendous amount of wisdom in giving situations time, distance and prayer.

Mathew 7:4 also reminds us that we should carefully look at our own faults, and not just glare at another’s defects. In doing that, going to the sacrament of reconciliation is always my first movement forward. It always brings another perspective and in this particular situation, the young wife, the young wife had years of pent up frustrations. She lacked the courage, or the know how to bring up issues right when they happened. So, all along she was living the part of the sweet daughter-in-law, and then boom, seven years into into the relationship – she no longer wanted to see the mother-in-law on her own.  The poor the mother-in-law was blindsided. Prayerfully remembering there are always two perspectives, two sides is helpful.

The Ten Commandments are a good “go to” resource when you trying to figure out what to do. If you take a look at the fourth commandment, (the only commandment that comes with a promise) it reminds us, as wives, that we are called to help our spouse honour his parents. Again, many cultures have  internalized respecting elders as a cultural norm. North Americans, not so much. It does beg the question, “Do we have to honour parents that are emotionally abusive, alcoholic or demanding?”

Well, if you read the commandment, it doesn’t say, “Honour perfect parents.” I am not saying throw yourself into the arms of an abusive father or mother. What I am suggesting is that it is always possible to honour our parents, even if it means keeping some distance at the same time. Sending birthday cards, Mother’s Day cards, ordering Masses, sending flowers, short polite visits, praying for them, are all ways to honour without getting “enmeshed.” The Catholic Catechism reminds children of their duty of gratitude. The Duties of Family Members in the CCC is a great read, I encourage you to read it and teach it to your children.

Remember not all counsellors, self help books and well meaning friends are going to give you advice that will get you to heaven. There are very many authors (and or friends) who will actually harm your relationships and perhaps stunt your spiritual growth. There is a battle going on for your soul. Be very careful who you seek help from. There are many great Catholic resources which will help you in uncovering the myriad of problems with many New Age and self help movement. Check out Women of Grace and Catholic Culture  to learn more. Personally, I have found having a spiritual director, a Catholic priest one of the greatest gifts in my life.

Our Catholic faith constantly reminds us of the importance of repentance, forgiving and being forgiven. Are you holding grudges in any of your relationships? Those grudges, your inability to forgive might be causing you huge problems with your mother-in-law. The Bible has many scripture passages relating to  forgiveness that are worth thinking about. Jesus while dying on the cross said, “Father forgive them, for they know not what they do.” Probably the most helpful scripture passage as it relates to our mother-in-law might be Matthew 18:21-22

This is when Peter came up and said to him, “Lord, how often will my brother sin against me, and I forgive him? As many as seven times?” Jesus said to him, “I do not say to you seven times, but seventy-seven times.

When trying to decide on how to handle a situation, it’s always best to study the saints (opposed to popular authors or self-help gurus, or even your friends). Go ahead and ask yourself, “How would St. Rita handle this? How about St. Monica? Or St. Therese of the Little Flower? Or St. Teresa of Calcutta? Think about St. John Paul the Great, Padre Pio, St. Francis de Sales and so on. We are called to be saints! Ask yourself, “How would a saint handle my mother-in-law?”

Being a Catholic daughter-in-law is not easy. Reflect on this before you decide to cut off your mother-in-law: “But to you who hear I say, love your enemies, do good to those who hate you, bless those who curse you, pray for those who mistreat you” (Luke 6:27-28).

Do you pray for your mother-in-law? Have you ordered Masses for her intention? Have you used sacramentals? Bless yourself with Holy Water before you see her! Discreetly leave a blessed Miraculous Medal at her house! Let her know you are praying for her.

Lastly get to know your mother-in-law. What is her story? How did she become the person who she is? Listen to her with your heart. You might be surprised. My own mother was a 13 years old during the aerial bombing campaign of Warsaw by the German Luftwaffe during the siege of Warsaw in World War II. She was pulled out of the rubble, (by Marian priests) her home decimated. She watched her own mother, pregnant at the time, being pulled out of the rubble and seeing her mother loose the baby right there, right then. It was traumatic. Yet, most family members wouldn’t know that about her.

My mom was an extremely joyful soul who often said that after the suffering she endured as a survivor of WWII, she considered the many crosses that North American women face as being “nothing.”

My mother’s experience often has me asking myself, “Am I being too soft? Am I a bit spineless? Am I being over sensitive?” Thinking back on the lessons she taught me, leaves me filled with gratitude and awe.

“You have to know how to suffer, how to sacrifice, and offer it all up to God. And Dorothy, if you think you’re better than someone else, you gotta know, they are going to end up in heaven and you won’t. Be careful of your own thoughts. It’s a battle right till your dying day.”