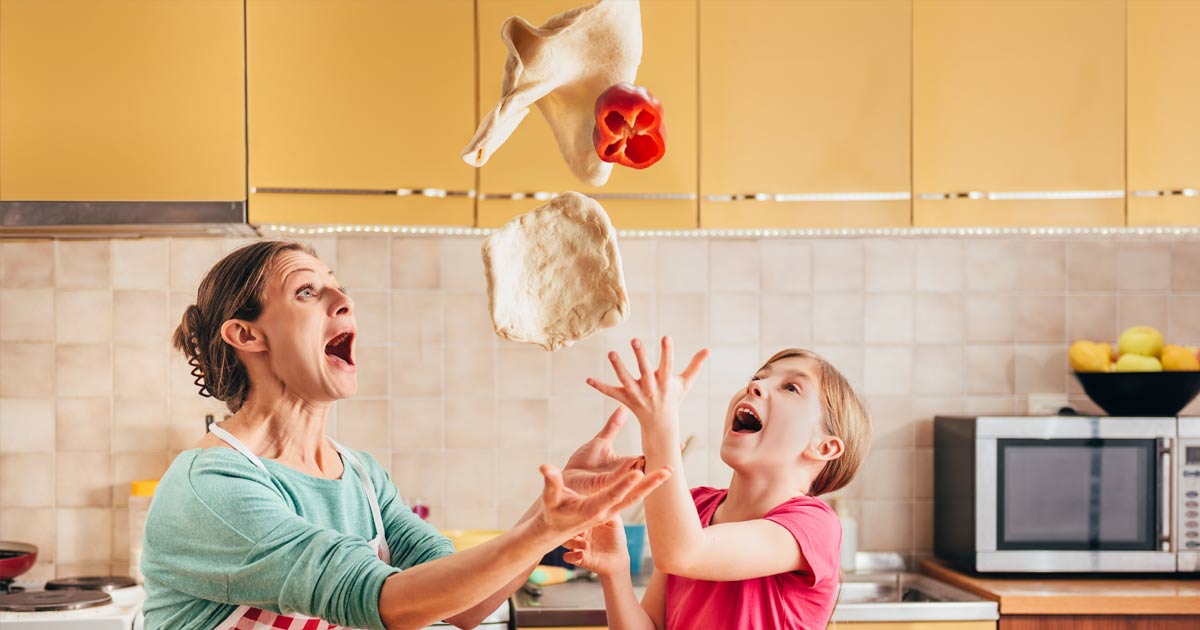 A Pope Nails Parenthood: “The Kingdom of Irrationality”

“Nooooooo!” I couldn’t help but cry out as the three year old began to pour the container of salt – the giant Costco container of salt, moreover – all over the kitchen floor.  He smiled gleefully despite my dismay, then scurried off as his older brother and sister chased each other through the kitchen, knocking the four-dollar cup of coffee off the counter to spread its sticky sweetness into the dunes of salt on the tile.

There went my plans of sipping coffee while reading and preparing for my upcoming women’s study.  I was supposed to be delving into St. Edith Stein’s contributions to Pope St. John Paul’s genius of women.  Instead, I was on my knees mopping up this mess. And I was tired, to top it off.  The tears tumbled out, mingling with the mixture on the floor.

I sat back on my knees, brushed the hair out of my eyes, and caught my breath.  That’s when the words pressed upon me.  A phrase that had struck me like a bolt of lightning when I had first read it, months ago.  “The kingdom of irrationality.”  It referred to a life of a mom with littles.  How perfectly it captured these moments of craziness, of days of dizzying activity yet seemingly devoid of any rhyme or reason.  Of coffee-stained to-do lists I can’t find.  Of laundry that mysteriously seems to multiply on its own.  Of pantry cupboards that have the opposite problem.  Of tears and tantrums and teenagers.  Of afternoons carefully orchestrated around naps that never happen.  Of days and nights that blur together sometimes into one long stretch of weary.

“The kingdom of irrationality.”  Thought up by a mom, right?  Probably one with a bunch of kids.  Wrong.  That phrase was coined by our own Pope John Paul II, written before his rise to the papacy, to a young mother, a long-time friend of his who was struggling to get enough sleep after giving birth to twins.  It is reproduced in George Weigel’s Witness to Hope:

You were afraid that I wouldn’t be able to read your letter to the end.  Well, I not only finished it but I carried its meaning within me for several days, thinking about what to reply.  Today, these thoughts crystallized when I was receiving the vows of some sisters. I sense tiredness in your letter, which is easy to understand…On top of this, you always wanted to plan and do everything rationally.  And here is the kingdom of irrationality, where normal activity and energy aren’t enough; you need to wait things out, some time to do nothing, and simply, patience – especially since there are two.  I realized that, on the one hand, there is always a price we pay for love.  On the other, thanks to God, love is returned in that price.  What I mean is, the concrete challenge of love cannot be separated from Him; it is always in Him. (215)

I mean, wow.  How did he GET it?  I really couldn’t have said it better if I spent a lifetime trying.  How many books and articles on time management, rules of life, and make-ahead meal planning had I read eagerly?  How many plastic bins and labelled containers littered our home from long-ago efforts at organizing?  How many schedules had been adopted and abandoned?  How many books waited to be read, how many plans filled my head, how many hopes in my heart?  And yet here I was, sweeping salt.  I want rationality, but I live with kids.  I live in a kingdom called “Irrationality.”  And this saint, who lived in the palace of Peter, seemed to know it so well that he named it.  He nailed it.  HOW?

Because he loved people, and he shared their life.  What I have read about Pope John Paul II is that, beginning as a young priest, he practiced something called “accompaniment.”  He believed a priest’s presence “couldn’t be limited to the sanctuary and the confessional”  (Weigel, 100).  He wanted to journey through life with those entrusted to him, and he did.  He studied with them, prayed with them, attended their parties.  He camped, hiked, sang, laughed with them.  He celebrated masses, weddings, baptisms.  I love this: for those expectant mothers in his circle of friends, he would give her a day of recollection before she delivered.  Not to mention, he heard their confessions, which could last an hour or longer.  In other words, he knew them, and he knew their lives, even the life of marriage and family that he had given up in order to serve them, to serve Christ.  And he walked that life with them. “The duty of a priest,” he wrote in 1957, “is to live with the people, everywhere they are, to be with them in everything but sin.” (Weigel 104)  “‘Accompaniment’ was a way of ‘walking with’ young adults, of helping them unveil their humanity by living through their problems with them.” (106)  The earliest group of friends sought out and formed by the young Fr. Wojyla called itself Rodzinka, which translates as “little family.”

And even when his life was transformed by the papacy and his friends had to share him with the world, I’m sure he took their intentions with him, and ours as well.  Until finally he not only walked with us, he carried us.  I think for all his worldly and spiritual accomplishments I’ll like this one best: that he managed as a busy priest to enter into the life of a mother, to ponder her words and worries “for several days” and that he took the time to write to her, encourage her, understand her, perhaps better than she understood herself.  So gently, he managed to remind her, without the faintest hint of “preachiness,” that of course love comes with suffering, but joined to God, it is given weight and meaning and is finally returned back to us.  As if to say, “I know this is really, really hard.  But it’s your vocation now.  And if you can hang in there, and hang onto God, He’ll wrap you up in Himself and make it beautiful.”

If Pope John Paul II longed to accompany his friends then, how much more urgent and perfect must be that desire now.  How much more real must be his longing to share our life, for the sake of drawing us with him into Christ, from that side of heaven.  With his humor, wit, wisdom, warm and pressing affection, now he is ours more than ever.  If there is a word that can best sum up our understanding of devotion to the saints, maybe it is “accompaniment.”  For although they have completed this part of life, we know they have no desire to leave us behind.  Indeed, as we profess, we are part of a communion.  Padre Pio said, “I will stand at the gates of heaven until all my spiritual children have entered.”  St Therese the Little Flower declared, ” I will spend my heaven doing good on earth.”

Sometimes we want a saint for a cause, an intention, a miracle.  But maybe we just need one for the journey.  Maybe we should allow them to accompany us, so see and share our little glimmering joys and stabs of sorrow.  To sense our tiredness, as Pope John Paul did with Teresa, and to understand it.  To enter into our everyday.  Isn’t there a beauty in that?  Today in his homily, our priest suggested that we don’t find the saints.  They find us.  They adopt us.  I guess you could think of it as bringing us into their own…Rodzinka.  A family that always shares in the everyday, the hum-drum, the sticky side of things.

Let’s gather them up then, this vast, varied collection of friends, more numerous than the stars.  A Catholic galaxy.  They may not always be able to make our lives more “rational,” but they offer us their unseen presence, sympathy, prayers, love.  They understand us and our wayward lives better than we realize and want to accompany us through them.  Let’s sweep them into our day, our prayer, our little spills and spoiled plans.  Like so many grains of…salt.

Who are some of your favorite saints – and how did they “adopt” you?

Claire Dwyer is a wife and mom of 6, mothering through the joys and challenges of teenager and toddler years, and delighting in the sacramentality of daily life. She graduated with a degree in Theology from the Franciscan University of Steubenville and now enjoys leading women’s studies and writing - when she can come up for air between loads of laundry. She also writes at eventhesparrow.com and Women of Grace - Welcome!