Mother-daughter relationships can be tricky. Some moms are overprotective of their daughters and can sometimes come across as overbearing, controlling, and sometimes they can appear down-right mean. Others get caught up in their careers and miss out on the treasure of mother-daughter relationships. Add to that the divide of being raised in a different culture (parents being immigrants) and you may have all the ingredients for a comedy, a drama, or a dramedy. We have all seen movies that characterize the typical Polish mother, Italian mother, Greek mother, and so on.

Well, my mamma was one of those “old school” moms. She was born and raised in Italy and immigrated to Canada in 1955. Being her only daughter, and the youngest of four, well, it was trying to say the least to be a girl in my family. Just like many mothers and daughters, my mamma and I danced a colourful mother-daughter dance, filled with joys and sorrows.

When I got married and moved into my own home, I thought that I was free from the burdens of being a dutiful daughter. But God had other plans. You see two years ago my mamma was ill. She had many blood clots and we were told to prepare for the worst. My feisty, opinionated, and vocal mom was sick, and it was a very scary time. It gave me reason to pause and pray. It was definitely a time of spiritual growth. Both mamma and I faced each other in ways we never have. Our vulnerability, fears, and grace drew us into a deeper understanding. The tensions turned into treasures.

In my visits with her in the hospital, I did not want her to despair – to feel like she was abandoned and to give her hope that she would recover. I told her that I did not believe this was the end. I looked at her in and told her that I would fight with her, that her story was not finished. I truly did not feel that this was the way her earthly life would end.

Numerous doctors’ appointments, hospital visits, and medical tests ensued. I took a leave from work to care for her—something I wanted to do because she was my mom and I wanted her to know she would not be alone. Slowly but surely, she began to get better. Today, two years later, she is alive, and praise be to God, with us still.

One of the great gifts my mom has is he love of cooking. Many delicious and traditional dishes have been prepared and consumed in her kitchen. One of the most revered foods is the ciambelle, a  traditional Italian bread that is well known and loved by people from Sora, the place that she and my dad are from. 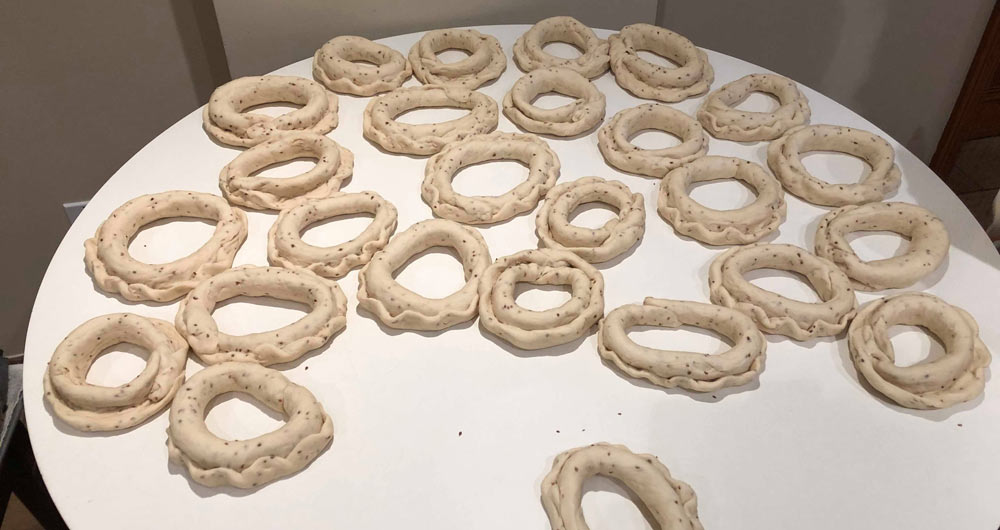 My mamma always wanted to show me how to make these. I have always resisted because she makes them in huge quantities and I find that too taxing. This past labour day weekend, she wanted to make them. Knowing that she could not do it on her own, I told her I would help.

I kneaded the dough – it was 22 pounds (10 kg.) sack of flour, along with the eggs, yeast, and fennel. It was a labour of love. We worked together, making and forming the perfect round bread. We laughed a lot and had so much fun.

I recently saw a quote on my Facebook feed, “Nobody has your back, like your Mama…Love her while she is still alive.” Our journey these past two years has been one of healing and love. Gone are the hard hearts and harsh words. I am so grateful that I have been given this gift, to break bread with my mamma.

Rema Celio is a happily married mom of two young boys and lives in Toronto. She is an active member of St. Benedict Parish.