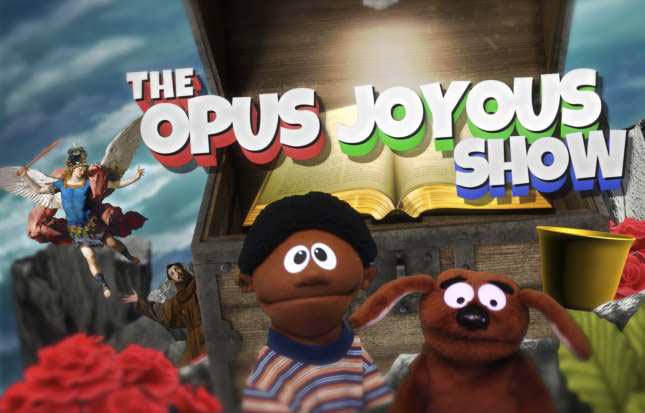 The Opus Joyus Show – a Catholic video series for kids!

An Ontario couple who documented the loss of their preemie triplets at 22 weeks as a moving testimony to the sanctity of life plans to produce a Catholic video series for kids.

Since losing their three children on November 15, 2012, Jason and Marie Taylor have become parents of three-year old twins, Colette and Jonah, and 16-month-old Jasper.

And they are expecting a second set of twins girls in March, which means they will be blessed with five children under the age of four. 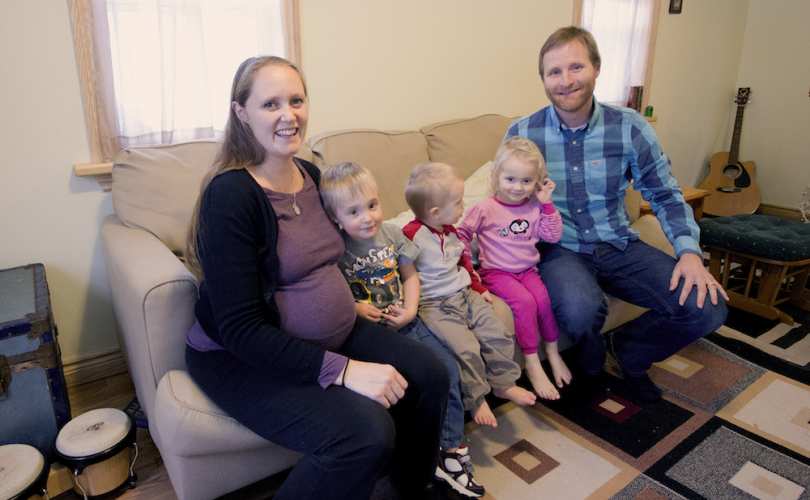 Marie and Jason Taylor and their three children

“And I’m sure many people wonder — we did not use extraordinary means to get pregnant with twins. Expect for the extraordinary fruit that holy matrimony brings!” Jason quipped.

Jason, an independent media producer, has launched a Kickstarter campaign to produce five episodes of “The Opus Joyous Show,” a video series to teach children the Catholic faith.

“As a pro-life Catholic father and video producer, the Opus Joyous video series is important to me because I believe it will be an awesome tool to help parents who are teaching their children to love God and love the Church,” he told LifeSiteNews.

The Taylors received widespread attention some four years ago when they crafted an exceptionally poignant video documenting the brief lives of their triplets, who were born at 22 weeks’ gestation when Marie went into labour naturally, and lived for four hours.

The two-minute video, entitled “Footsteps: In memory of our triplets,” is a series of still photos set to a song written and sung by the Taylors.

It shows Jason and Marie cradling Adam, Bernadette and Christina, who weighed less than a pound each and were swaddled in warm garments and wearing tiny caps.

The Taylors made the video as a testimony to the lives of their first-born children and to encourage couples to make the choice for life even under difficult, frightening, and wrenching circumstances.

Marie had been offered a “fetal reduction” — to have one or two of the triplets killed in utero, a choice she and Jason rejected categorically.

“Hopefully, our babies’ lives can make a difference somehow, even if it’s just giving strength and affirmation to people currently in the pro-life movement,” Jason told LifeSiteNews in 2013.

Indeed, the video has since been viewed more than 7.1 million times“and has been featured on secular websites such as Viral Nova and the San Francisco Globe,” Jason related. “What a testimony to life our little babies have been able to offer.”

As for his new endeavor, The Opus Joyous Show, “I guess you could say that it’s a Catholic version of VeggieTales in the sense that is will combine faith, music and fun with storylines and characters,” Jason told LifeSiteNews in an email. “But the style will be a lot different.”

Following the adventures of Opus and his dog Joyous, the show will feature a mix of puppetry, 3D and 2D animation and “tons of original music and songs, all tied together with solid catechesis and teachings in line with the Magisterium of the Catholic Church.”

Children will learn about the priesthood, sacraments and saints, Mary and the Rosary, and there “will even be a vignette on the sanctity and origin of life.”

“A key element of the plot will be the special Bible that they find in a treasure chest which allows them to travel into the time of the Bible where they can witness events like the birth of Christ, or meet Peter our first Pope,” Jason explained.

He’ll also be working with a team of people well versed in Church history and theology “to make sure everything I’m doing is in line with the teachings of the Church.”

He was a marketing lead at Camp Brébeuf and had a two-year stint as a creative production specialist for the Archdiocese of Denver before returning to Ontario last spring.

Since starting his own company, Jason has done “a lot of work for other clients such as the Archdiocese of Denver, Christopher West, and others,” but the Opus Joyous Show will be his first venture into “original content creation.”

Whether the project gets off the ground, however, depends on whether he gets the funding.

The Kickstarter campaign is all-or-nothing, which means if Jason doesn’t raise his goal of $33,000 by Christmas Day, he gets zip. To date, he has reached 43 percent of his total.

“I think it’s really important that we do all that we can to help children to know, love and live their faith, equip them for the good and the bad, teach them about right and wrong and ultimately help them get to heaven,” he said.

“My prayer is that The Opus Joyous Show will be a light in the darkness and confusion of our times, a beacon of hope and joy,” Jason told LifeSiteNews.

“It’s a lot to aim for, I know. But life is short and I feel called to this mission.”

This article is reprinted with permission from LifeSiteNews.

YES! I would like to join you in praying the novena to Blessed Carlo Acutis October 4 -12, 2022. Please send me the novena prayers!

Success! Check your email. Your novena should be there!