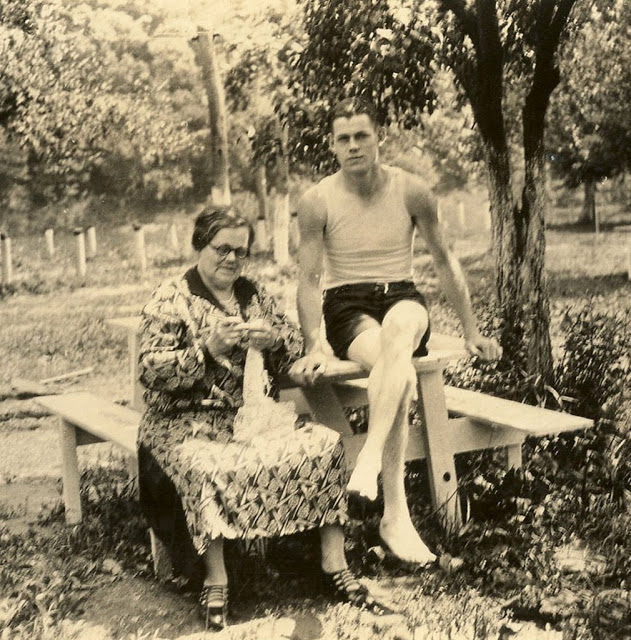 Things My Mother Used to Say

My mom’s birthday was yesterday and Father’s Day is on Sunday and I was reflecting on the words of “wisdom” parents “share” with their kids.

You know what I’m talking about. My husband’s parents used to tell him that he couldn’t have more ketchup because it was WAY too expensive, and that every time he turned the lights off and on it cost 25 cents. When he grew up and moved out he was surprised, and delighted to find out that neither ketchup nor light-switching were all that expensive.

I suppose that all parents get to a point with their kids where they will just say anything to appease or pacify or make them stop doing what they’re doing (in my husband’s case, I think it was drinking ketchup and playing dance party). Thinking back on my own childhood, I know my parents had a handful of one-liners that I thought were meant for pacification, but when I reflect on them (now that I’m grown and over the teenage angst and eye-rolling — mostly) the things they used to say were actually good.

1.  Offer it up
(As in, offer this [suffering of some kind] up to God) I imagine that every good Catholic parent can be heard saying this to his or her kids, and my parents were no exception. As a child I used to think it was an easy thing for my mom or dad to say when I scraped a knee or stubbed a toe, and couldn’t understand a God who wanted me to suffer so that I could “offer it up” to him. But as an adult I realize there’s so much more to it.For Catholic Christians, suffering isn’t just something to be avoided at all costs. Not only is it part of the human condition and completely unavoidable, but it can also be redemptive, a gift to us — a share, albeit a small one, in the pain that Christ suffered. The catechism refers to suffering in its section on the Sacrament of the Sick. It states, “By the grace of this sacrament the sick person receives the strength and the gift of uniting himself more closely to Christ’s Passion: in a certain way he is consecrated to bear fruit by configuration to the Savior’s redemptive Passion. Suffering, a consequence of original sin, acquires a new meaning; it becomes a participation in the saving work of Jesus.” (CCC 1521) This, as I have come to understand, is uniformly true — all suffering, of any kind, can be transformed in Christ to help the world, help your neighbor, and also to help yourself to get to heaven. Now THAT is pretty cool.

2.  It’s always good to have good friends
This little ditty was usually said in response to questions or in conversations surrounding boyfriends/girlfriends/dating. It would usually go something like this: Me: Mom, I like this guy but I don’t know if he likes me. Mom: Well it’s always good to have good friends. The saying drove me (and my siblings) up the wall half the time, but I have come to believe that it is genuinely true.Because as it turns out I have a disposition that falls on the nervous side of the spectrum. When it came to dating relationships in my 20’s I was anxiety-ridden and guys would not often make the “cut” for a second date. I’d all but given up in my early 20’s as I figured there’d be no way for me to get to know someone, at least not with the way the dating scene and I were getting along at that point.

I did meet someone. And through a miraculous series of events, we had to stay friends for several months before he could ask me out on a date. Those months turned out to be foundational for us, a way for us to get to know each other without the pressure of the one-on-one dating scene. We established a solid friendship then, but were also blessed to make several other solid friendships during that time as well, friendships that have richly blessed our married life. So as it turns out, it IS always good to have good friends.

3.  It has nothing to do with fair
I have 6 brothers and 1 sister. eight kids equals lots of fighting, and lots of inane fighting at that. We kids were constantly running to mom to tattle or complain that something was not fair and she inevitably returned with, “It has nothing to do with fair”. And she was right. It almost always had more to do with sharing, with allowing others to be in our space or use our stuff, and sometimes we needed to teach someone else how to share properly. I think most kids (and most adults?) have this overdeveloped sense of what is fair for ME, and an underdeveloped sense of what is fair for the OTHER. These words of wisdom certainly helped remedy that.

4.  This will hurt me more than it does you
This is a tough one because it was said before a discipline of some kind and I never believed it at the time. Now I work at a college with 80+ young people in their late teens and early twenties, and I can say with certainty that discipline often does “hurt” the discipliner more than the offender, if only for the fact that the discipliner has to weigh the actions, stew about the consequences, and then actually administer the discipline. It’s hard. It’s a drag. It’s being the bad guy when all you want to be is the good guy most especially when it’s with the people you love most in the world, like your kids. But it’s one of those things that is necessary for the offender that you hope will shape him or her into a good, virtuous, God-fearing, responsible person. What’s more important than that?

5.  You’ll thank me for it someday
Oh, that darned violin. I hated practicing. I only moderately liked playing — mostly because the violin was a hard and unforgiving mistress. But it was something all of us kids did, learn to play an instrument (or several). And I did it too. We all play the piano, guitar or violin or a mixture of the three, with other instruments thrown in as well. My brother is a music teacher; my sister is studying music at university. We were sometimes called the Canadian VonTrapp family because we would “tour” the local nursing homes and Church lady get-togethers and put on little shows. In truth, although there were times I swore I wouldn’t be, I am thankful to my parents for the talents I have because of their perseverance. I grew up thinking that everyone learned musical instruments, that it was no big deal, and that everyone could play music the way we could, but that’s simply not true. Having now met enough people who long to be able to play the violin, I understand what a talent it is and I’m grateful, just as my mom said I would be. However did she know?

Sarah Gould. “Things My Mother Used to Say” The Feminine Gift (June 18, 2015)
Reprinted with permission of the author.

Sarah Gould has moved 6 times in 11 years. In between learning the art of packing and un-packing, she developed a passion for femininity, which is more than just a bodily configuration of physical attributes but a whole way of being and living, and blogs about it at thefemininegift.org. With no particular career in mind, Sarah has worked in a variety of fields, the most interesting of which were an office manager for a medical doctor and the associate dean of students at a small Catholic college, Our Lady Seat of Wisdom Academy, both of which provided an in-depth look at the intricacies and hypocrisies that is the human person. Lover of the Lord, her husband, and a good book, Sarah has written for Serviam Ministries, Catholic Insight and Dynamic Women of Faith blogs. One of her articles was recently included in the book Catholic New Evangelization Guide.